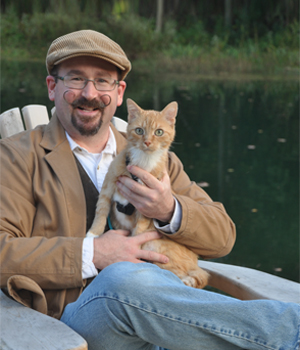 Dr. Brent Fischer graduated from the Ross University School of Veterinary Medicine (St. Kitts, West Indies) in 2006. Trained in the United States, Brent came to Campus Estates Animal Hospital in the summer of 2009 with extensive training, including an internship in emergency medicine at Dove Lewis Emergency Animal Hospital in Portland, Oregon. His professional interests include emergency medicine, critical care and pain management. Prior to veterinary school, he gained diverse experience in behavioral ecology and animal science including research projects on water snakes’ ability to detect prey or predators in a pond, distribution studies on humpback whales in Cape Cod, and working as a zookeeper in his hometown of Indianapolis, IN. Being the son of a mechanical engineer (father) and a professional artist (mother), he enjoys employing both logic and creativity in treating some of the more unusual emergencies, especially with exotics. Extracurricular interests include scuba diving, live music concerts, downhill skiing, movies and books. He now resides in Guelph with his wife and five cats, two of which were rescued through Campus Estates and/or the Guelph Humane Society.

We are committed to providing the highest quality of medicine within a warm and compassionate family atmosphere. We cater to the needs of our patients with a gentle hand.